Get my Book's
1st Chapter
for Free

First  Chapter exposes reality of Was'was in every detail So that you Feel empowered & Never fear from Was'was again .

This Chapter Shall be
EMAILED to you Right Now 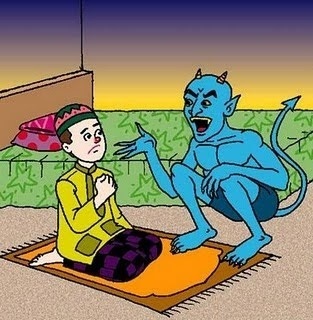 in Salat (Salah) is perhaps the most common challenge which a Muslim has to affront in the journey of his Spiritual  life. We are yet to hear a single Muslim who hasn't conquested with the ﻿﻿whisperings of Iblees' progeny﻿﻿﻿ in his prayers. And dealing with this type of was'was requires special focus and commitment.

Importance of Focus in Salat:

Allah has made Salat ( Salah ) the most important after Belief ( This has been conveyed to us by a Hadees from the Beloved Messenger of Allah in these words:

When ever Allah has mentioned the concept of prayer in the Holy He has ordained us to "establish" One of the most important prerequisites establishing our prayers is the presence of Heart. of heart means that our attention is focused towards Allah (SWT) and not to the worldly affairs.

Such a Salat in which there is   of and outward aspects but of heart and focus is like  " a Dead slave girl given to a king as a said a wise old man. It means that such a prayer would not bear any fruit and

the rob us of the most important part of which is the  "Presence of Focus & Heart ".

Most Common Types of in

Now lets dive deeper inside waswas in salat (Salah) to explore them further :

Forgetting is one of the most common which Muslims suffer with.  It just so happens that you are offering  your prayers and all of a sudden your mind seems to just wander aimlessly in different directions. Sometimes you are reminded of the daily chores of  your kitchen or office, other times your thoughts take you in a past event, still at other you are reminded of a solution to the problem you are grappling with in your career or family life.

Can you Relate with

you can because I am as sure as daylight that this happens to every Muslim in some or all of his/her prayers.
And what follows next is even more annoying i.e we seem to forget which "" of Salat we were offering. And like an confused child we ask
" Ya Allah !  Where was I ?"
But no matter how much we we can not recall

Read Below the Case of a Muslim : “It frequently happens during Namaz (Salah) that I forget the correct number of Rak’at I have performed. For example, I get confused during the Salah whether I have performed two Rak’ats or three Rak’ats. Normally in such a situation I repeat my Prayer all over again. Is this what we are supposed to do or is there any other solution to this problem?

Although there are a number of solutions to this problem of forgetfulness in Salat in the light of Sunnah; but we shall teach here one of them which shall benefit you a lot.  And it is very simple.
Here it is :
"﻿Always Place a Sutrah in front of you and get close to it " A S is any object of plastic that is of the height of a  A camel's saddle is of almost one forearm's length.Placing a Sutrah before is a confirmed sunnah. As Prophet Muhammad ( May Peace Be Upon Him ) said :

“When one of you prays, let him pray facing a , and let him draw close to it.”            ( narrated by Abu Dawood with a isnaad) . When the Prophet travelled, he would take with him a short piece of wood and pray facing it.

helps us with  in since it restricts our field of vision and provides us a focus area inside of which we can keep our attention centered. Where we look at during different Arkaan ( Components) of our Salah is of utmost importance and plays a major role in maintaining" To disturb our prayers, uses other people as well.  Iblees would put a thought in the mind of a fellow person who is near you in Mosque or at home.That person would want to pass in front of you while you are praying. This is the plan of  Iblees  to distract you from your prayer.
If you have not placed any in front of you, then that interrupter person will commit a great sin while your shall get disturbed." In the same vein, the Prophet (peace and blessings of Allah be upon him) advised the one who is praying to Not allow anyone to pass between him and his . He advised this in these

When any one of you is praying, he should not allow anyone to pass in front of him, and he should prevent him as most as he can. If he insists, he should fight him, for he has a companion [i.e., Shaytan] with him.” (Reported by Muslim, 1/260; Saheeh al-Jaami’, no. 755) Why is Placing a Sutrah of Such importance  ?

Placing a actually serves two purposes. First of all, it  helps you maintain your focus on the Salah and it wards off any that could sneak inside your thoughts because of of your focus. Secondly, it saves your prayers from being nullified.
g nullified. Yes ! If this a news for you then hear it again please:

" Your Prayers can get Nullified if the below-mentioned things pass in front of you and you have not placed a sutrah infront of you to protect your prayers - Here are the words of our Beloved Prophet (May Peace Be upon Him ) in the same context :

“The prayer of a Muslim man is invalidated if he does not have in front of him something like the back of a saddle, by (the passage in front of him of) a woman, a donkey or a black dog.” Narrated by Muslim in his Saheeh from the hadeeth of Abu Dharr. Muslim also narrated it from Abu Hurayrah, without mentioning the word black.  In the hadeeth of Ibn ‘Abbaas it says “A woman who menstruates” i.e., an adult woman. The correct view is that which is indicated by the hadeeth: that these three invalidate the prayer.

Conclusion : What you need to Do Now ?

Want to Cure Your Remaining in Salat as

In the Book "Cure your Was was Forever "  we teach step by step method  to cure all remaining 5 kinds of was'was in your Salát(Salah) by sunnah method.
Moreover, We also teach you a very powerful psychological technique that can be applied to regain control of your mind. This   once applied to your helps you regain the lost focus  and serenity in your Salah. Just after practising it for 7 We are sure that You shall Insha-Allah regain control of your thoughts. Get it Now ! lorem ipsum dolor

Discover The 3 Secret Habits That

Report shall be Emailed to you