Hasad Envy and Jealousy in Islam and Hasad Symptoms 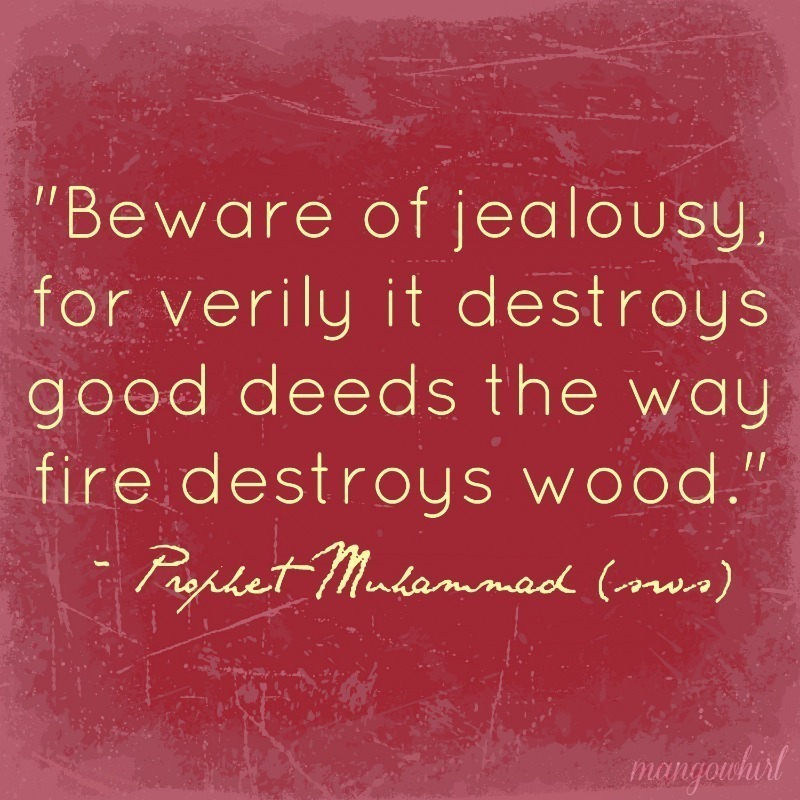 Concept of Jealousy in Islam

Let’s be honest with ourselves. We all Fall a Victim of  Envy or Hasd or Jealousy in Islam; daily or at some point in our lives.  And we also wonder what is Hasd, jealousy or Envy in Islam and we also keep wondering what are the symptoms of Hasd.

Here are some examples of Envy –

1) A Woman is envious of another Woman for her Beauty.

2) A man is full of jealousy for of his coworker for his Success in the office.

3) Parents showing symptoms of Envy for the success of their relatives’ children in academics.

4) A girl having symptoms of jealousy for her classmate for her getting more attention for her ostensible outlook.

4) A boy getting jealous of his friend for he is more popular in sports. etc

6) A man jealous of another man for the beauty his spouse or by the success of his relationship.

They may sound harsh cases but let’s be cognizant of the reality that we feel such baser emotions, despite how much we detest and dislike them.

After all, we are all humans and  ” To Err is Human & to forgive Divine”.

So all of us Err and one or other time in our lives become a victim of what we call jealousy in Islam and then show symptoms of hasad.

Can you relate to any of these cases we stated above?

How Serious of a Problem is Hasad?

Hasad is a very serious problem for both the Sufferer and the Victim.  The one suffering from hasad keeps on bulldozing his inner peace and keeps boiling and embroiling in an endless chain of fit and rage. While, on the other hand, the person who is a victim of jealousy ( one who is being Envied )  can become a Victim of EVIL EYE.

Let’s Study a Few Narrations in understanding it deeper –

“There has come to you the disease of the nations before you, jealousy and hatred. This is the ‘shaver’ (destroyer); I do not say that it shaves hair, but that it shaves  (destroys) faith. By the One in Whose Hand is my soul, you will not enter Paradise until you believe, and you will not believe until you love one another. Shall I not tell you of that which will strengthen love between you? Spread (the greeting of) salaam amongst yourselves.” (A hasan hadeeth. Jaami’ al-Tirmidhi, 2434).

A Case of  Jealousy in Islam

A reader  wrote to me

I hope you are well. I came across your work on waswasa and really need your help. I have currently been going through the past couple of months feeling a very disgusting feeling of serious hasad/ evil feelings and ayn towards my fellow brothers and sisters in the religion. These things  I feel enmity towards which people have I do not why I feel it it’s taking over my life and I feel sorry for each person I am harming with my ill feeling towards them I can’t stop thinking about them I sleep and wake up with the thoughts. I do wish them ‘Allahuma Barik’ its feels I am giving ayn** a lot of the times I really need your help.

First of all, let’s try to understand what is Hasad or jealousy.

” Hasad if a Psychological state in which a person who is a sufferer from Hasad wishes to deprive another person of the blessing, quality, gift or merit which that person is cherishing. “

One fine point to understand is that the Hasid ( One who envies ) might be jealous of a Real as well as an imaginary object / Quality of the person being envied. Since Hasad is a psychic condition hence it does not matter for the Hasid if he is envying a real object or his mind has tricked him into envying a false or imaginary merit or possession of the victim. The person being envied is termed as Mahsud in Arabic.

It is clearly stated in the Holy Quran that :

” Or do they envy [other] people because of what Allah has given them of His bounty?

Jealousy can be caused by different sources – We shall shortly discuss each one of them here.

Case 1: The source of Envy is Madhub: In some cases, Madhub ( the person being Envied ) becomes the very source of creating the feelings of envy or jealousy. it seems such strange to hear this but yes the victim of jealousy himself is the source of jealousy. let us explain how.  A person being envied invites the distasteful emotions of feelings in another person’s heart by showing off  ( intentionally / unintentionally ) his /her gifts such as spiritual, and moral merits, or good and pious deeds, or outward factors like Riches, Status, and prestige.

Case 2: The source of Envy is Hasud: Hasud is the person who envies. he doesn’t do it on purpose sometimes. Just as we do not get Sick/ill sometimes intentionally, likewise a hasud sometimes doesn’t want to commit the act of Hasad or jealousy but can’t help it.  Ill feelings of enmity, inferiority complex, a past or present trauma, a deprivation of a blessing (child, health, riches ) sometimes put a person under the invisible spell of Jealousy.

“O son of ‘Imran, never be envious of people concerning the favors I have conferred on them by My grace, do not glower at them, and do not succumb to your (envious) self. Indeed the envious man is indignant at the bestowal of My favor, and contests My apportioning of gifts among My creatures. Whoso is such, he neither belongs to Me nor do I belong to him.”

1 –  Degree one of Hasad is when a person wants the gifts to be taken away from his Muslim brother, even if it does not reach him directly or indirectly; rather he does not want Allah (st) to give anyone else and that displeases him. This One is not permissible for a Muslim.

2 – The second degree of Hasad is where the hasud wants the blessing to be taken away from someone else because he desires it and wants that blessing to be given to him.  This One is also not permissible for a Muslim.

3 –  The third degree is When he wishes for himself a blessing or a gift which someone else has, but does not desire it to be taken away from that person. This is a permissible form of Envy it is called Ghibtah.

Certain emotions lead us into the habit of Envy. Hence we need to keep a check if we are struggling with one or more of these emotions.

Sometimes, a Hasud becomes a Victim of his Hasad in the manner that he is in a consistent state of  ” Wehm ” & ” uncertainty ”  if he /she actually means what his Mind is whispering?  Questions like this start to emerge in his Mind

I am such a sinner since I have so much of Envy in my heart for others.

In Such cases, a person becomes a Victim of  ” Victim of Anxiety & Compulsive Behaviors”

Some of the Common Behaviors include if you are suffering from Was’was Al Kahri of Jealousy are :

1) A person keeps reciting  ” Masha-Allah ”  / ” Astagfirullah ” COMPULSIVELY; For example, you look at the people, their blessings and thoughts strike your mind that you are Envying them and there and then you start saying  ” Verses”; so that not to inflict them with your Evil Eye.

2)  Even the thoughts make you feel like a Victim of your jealousy.   For example A thought of some one’s wealth or beauty strikes your mind and you get confused that you have become a Target of Jealousy.

3) The Feelings of  Guilt are uncontrollable.

4) All day you are struggling with feelings of Confusion if you are a HASUD or not.

Now your problem is Not only  Spiritual but also Psychological

From the OCD Therapy Course

We shall Email you the Link to Video , Just Sign in Below

Previous Post Waswas in Wudu and Possible Cures ! Next Post Do you want to become every one’s Favorite ? Just Include this quality in your Personality –