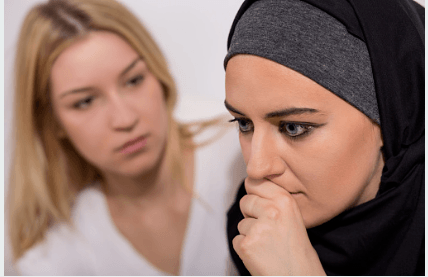 Waswas in Islam ( Waswas or Was'was ) ; anyone can become a Victim of them .You, me or any person who is a Muslim can become a target of waswasa in Islam, irrespective of his or her background, nature, temperament or mental health.

The answer is fairly simple to understand!

As per Islamic teachings, the world is a "Place for a test " and everyone has to pass through it in the way that Allah taála has destined for him/her. As has been clearly stated in the Glorious Quran that:

"Or think you that you will enter Paradise without such (trials) as came to those who passed away before you? They were afflicted with severe poverty and ailments and were so shaken that even the Messenger and those who believed along with him said, "When (will come) the Help of Allah?" Yes! Certainly, the Help of Allah is near! "
[Surah Baqarah 2:214]

Our beloved Prophet Muhammad ( May Allah's blessings be upon him ) had also summed the transient and reality of this world in these words : "

" O Abu Tharr, by Him in Whose hand the soul of Muhammad is, if this life equaled near Allah to a wing of a mosquito or a fly, He would not give to the disbelievers in it a sip of water"

What do these Islamic verses teach us about waswasa ?

We are being conveyed , time& again , that as the objective behind the creation of this world is to differentiate the followers of "Rehman " from the followers of "Shaytan" , therefore it is but compulsory that a Muslim shall be tested sometimes through trials, diseases and tribulations and other times with abundance of health or wealth .

And a Muslim's duty is to stay full of gratitude when he is being given health & wealth, and he should stay patient when he is struck by a calamity . In its nature, Waswasa seem like a great and painful calamity but there is flip side to it as well . Was'was can also be a blessing in disguise for a person as he could be being tested by Allah Taála and as result Allah wants to elevate his status in the afterlife. Therefore :

" A Muslim should face Was'was with utmost Bravery & gratitude, for it can be a Blessing from Allah which time shall prove later on , Insha-Allah !

1) Arrogant & Haughty becomes a target of Waswas in Islam

Arrogance is the most despicable trait which a human being could possess. Let's study what is arrogance in the words of an enlightened scholar who defines an arrogant person as :

"Those individuals who look down upon others, those who think they are superior to others in terms of looks, intelligence, status or piety, those who are convinced that they are right whilst everyone else is wrong, those who can not speak without praising themselves, those who belittle or talk down to others and have huge egos. Since we strongly detest this trait, it makes sense that we scrutinise our own characters and check whether or not we possess the very same thing that we can’t stand in others "

Type of Was was which an Arrogant Man becomes a Victim of:

An arrogant person is likely to fall a victim to a certain kind of was'was where he shall suffer from a "God's Complex" and he would start to belittle the teachings of Islam and religious personalities in his mind and slowly through his tongue ; so much so that a time may approach when he shall become a total disbeliever in Islamic injunctions .

Hence the question arises , why does Arrogance lead to Was'was ?

The answer is very simple: Because arrogance is that trait of Shaitan which became the reason behind his expulsion from an exalted position which he was enjoying before in Heavens. As an Islamic scholar describes this :

"It is said that before his fall Satan was an extremely religious being, who through his devotions to Allah (swa) managed to reach the status of an Angel. However, he refused to bow down to Prophet Adam (AS) because he thought he knew better than Allah (swa) and considered himself more superior then Prophet Adam (AS). As a result he was banished from Heaven forever. We too, should be careful of our “self-righteous/ holier than thou” attitude, which can subtly take us away from Islam.

We should all delve deep in our hearts and check if there is any modicum of pride or haughtiness sneaking in any corner of our hearts; If we find it there and then we should resort to Allah and ask for forgiveness. This practice shall be repeated every now and then. Because the feelings of pride can come crawling secretly any moment and we need to cleanse our hearts very often.

As per the enlightened scholar , One more alarming thing here to note is that :

"The people of knowledge and piety are in greater danger of arrogance then anyone else. An increase in knowledge and incorporating a few pious actions into their daily life, result in many people becoming victims of the superiority complex and adopting a “holier then thou” attitude towards others. These people adopt the annoying habit of “preachifiying” ; they become religious snobs and look down at those whom they consider are not living up to their high standard. They become unapproachable and fail to deliver the true message of Islam. People feel uncomfortable and insignificant in their company and as a result many are driven away. "

"All the doors to Allah are crowded except one; the door of humility and humbleness.

"The cure for arrogance is to remember at all times that Being humble is one of the secrets of success although it is hard on the soul.

If you are aware of your humility then you are arrogant”.

One should also know that our greatest role model is our Beloved Prophet (saw), who is the greatest of all human beings, and His greatness lies in being the most humble and modest servant of Allah (swa)."

May Allah (swa) keep our hearts filled with humility and no modicum of pride may ever enter inside . We need to keep evaluating our hearts from deep inside and the cleansing be done every once in a while for our faith to get stronger and for our Was'was to get weaker .

​ If you are Serious About Healing yourself ,  from your Was'was then  you should be aiming to take action now .  Below you can download the  FIRST CHAPTER  free from the Best Selling E book ,  " Cure your Was'was Forever "